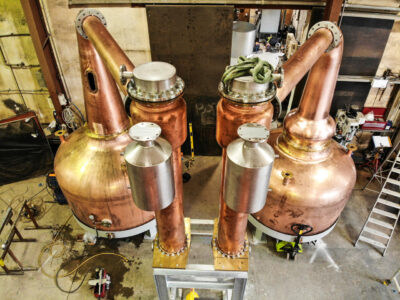 To deliver our whisky stills and primary equipment, we have selected Scottish supplier LH Stainless/Speyside Copper Works. LH Stainless was chosen after a thorough process of supplier research and estimation of quotes and proposals assisted by Allen Associates.

LHS is a reputable distillery manufacturer with a long tradition of strong craftsmanship and engineering. Relying on time-honoured traditions such as hammered copper stills allied with the latest in 3D design technology, LHS was just the right match to the focus on quality we have in Faer Isles Distillery.

Based less than 5 miles from Dufftown in Speyside, it is situated in the heart of the major whisky distilling area in the Scottish highland.

LHS provides process engineering, vessel manufacturing, and design services for the distilling and brewing industries. They offer everything from initial concept design, manufacturing, commissioning, and production, including turnkey distillation projects.

LH Stainless is a key supplier in the whisky industry and has carried out substantial projects for all of the major distilling companies in Scotland including Diageo, Chivas Brothers, Dewars, William Grant & Son and Beam Global. LHS have also been the selected provider for several ambitious craft distilling startups in recent years such as Ardnahoe, Holyrood, Isle of Raasay, and Nc’nean as well as supplying mashing and distillation equipment for new distilleries as far afield as China, Australia, New Zealand and Finland.

When it was announced that we would be allowing people to use crypto currency to buy shares in Faer Isles Distillery, we received a lot of questions. Crypto currencies still seem to have a bad reputation due to the initial problems associated with it. Therefore, we will try to explain.

First of all: using crypto currency will not be the only way you can participate in the crowdfunding later this year to buy shares in the company. You can use US dollars, Euros and Danish krone as well. Using crypto currency is only an option among others.

The Faer Isles Distillery crowdfunding will be managed through a Security Token Offering. An STO is similar to an IPO (Initial Public Offering) as it enables people to invest in a company. The difference is that the shares are not traded on a traditional stock exchange but instead via a digital blockchain platform. This method is becoming more and more common for startups, but Faer Isles Distillery will probably be the first whisky distillery in the world that will allow crypto currencies as means of funding.

Traditional financial securities such as stocks and bonds are increasingly moved to the blockchain infrastructure due to the many benefits of this technology. The main benefits are that shares and bonds are digitized, and the online trading of these digital securities becomes possible without relying on any middlemen that charge you. The World Economic Forum predicts that 10% of the global GDP ($7.8 trillion) will be stored on the blockchain by 2027.

A Good Way to Invest

Everyone who invests in (or later trades) shares will need to go through the KYC procedure (unique identification), which is governed by EU legislation, ensuring protection against money laundering (AML) and similar problems that have previously been connected with crypto funding.

As mentioned above, tokenized shares are more easily tradable than normal shares on stock exchanges. This makes it easier for whisky enthusiasts to use Faer Isles Distillery shares as an investment option that they can later trade. So the upside from an investor point of view would be both the (potential) annual dividends, the (potential) price gains of the share, but also the avoidance of trading fees for middlemen. Since so few companies are yet to be traded this way, tokenized shares are highly attractive to investors owning any form of crypto currency. The tokenized shares in Faer Isles Distillery, therefore, can be regarded as an alternative investment form – even for people with little interest in whisky.

No comments to show.